Number our days….number those whom we remember

For so many of us, the number “Six Million” is burned into our heads from our earliest days.  It’s an unfathomable number, though projects like the Paper Clip Project tries to make it concrete for us.

But the number of unfathomable deaths, the number of those who died because they were different, marginalized by propaganda and hatred, is much bigger:  11 million.  Eleven million people died in the blackness of that period:  artists, political activists, gay men and women, those with physical and mental “imperfections”….the blackness tried to build a world in which everyone was the same, where differences were dangerous. 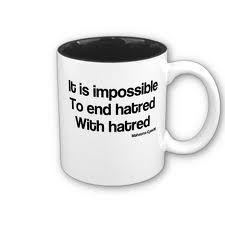 Think of all the people you know.  Is your personal world filled with all the same kind of people? I can’t imagine a world where everyone is the same.  Differences make my personal world vibrant, alive, interesting….and frustrating, too.  But never boring.

God didn’t create boring.  God loves diversity – just look around!  It is we humans who can be uncomfortable with what’s new and different.

In honor of the eleven million, cultivate diversity in your life.  In honor of the eleven million, be vigilant against marginalization of those who are different.  Putting people on the margins, on the “outside” makes sets up “them” and “us”, and then we can so easily become blind to the “them.”  When you can’t see someone, it’s so easy to forget how to care about them.

Eyes open, hearts open, in honor of the eleven million. Never again. For anyone. Anywhere. Ever again.

This entry was posted in More thoughts and musings and tagged Holocaust, six million, Yom Hashoah. Bookmark the permalink.