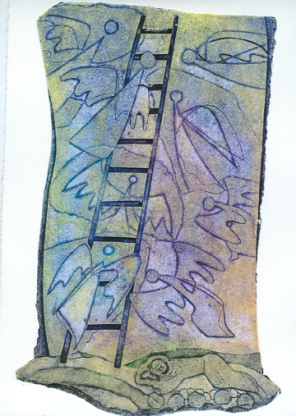 There’s a lot packed into the word, “if”.  It looks so small, only two letters, and  yet so much hangs on it.  The “f” even looks like something to hang a lot on.   And we do hang a lot onto it.  “If” puts conditions on things, people, situations.    It can be a serious bargaining word (“We’ll cease aggression if you do the following”) or something that greases even the most basic of society’s wheels (”If you do the dishes, I’ll take out the trash”).  But everybody notices when Jacob uses “if” in this week’s parasha, Vayetzei, because it seems to challenge faith itself.

Jacob has left Beersheba after his mother tells him to flee from his murderous brother, Esau.  Esau’s angry, by the way, because Jacob had deceived their father Isaac and stolen the firstborn blessing.  He embarks on this journey, but unlike his grandfather Abraham, Jacob knows where he’s heading:  Haran, his mother’s hometown.   He lies down to sleep, and has a dream about angels and ladders and God.  In this first Divine encounter, God repeats the promise, the brit (covenant) made with Jacob’s family.  He wakes up, realizes how profound an experience he’s just had, and sanctifies the spot with a pillar, some oil, and a new name (Beth-El – house of God).  And then he makes a vow:  If God remains with me, if He protects me on this journey that I am making, and gives me bread to eat and clothing to wear, and if I return safe to my father’s house, Adonai shall be my God” (Gen. 28:20)

That’s a lot of if’s. Many traditional commentators are bothered by what seems to be conditions put on God.  Midrash Rabbah (70:4)  prefers to read “if” (‘im in Hebrew)  as a form of promise – “if God does all of these things for me, then I will be protected from temptation and sin, and will have no problem being faithful to God.”  Maimonides changes the translation, reading  ‘im not as “if” but as “when”: When all these conditions are met, there can be no doubt that the Eternal is God. And therefore the passage is not conditional, but rather a vow of faith.

But when I read this, it seems pretty straightforward to me, and I choose to struggle with it at its surface reading:   Prove Yourself to me, and then I’m in.  It’s absolutely understandable.  Jacob’s starting out on a journey, and danger awaits.  But what does that say about his faith?

We have faith in all sorts of things, like our marriages, the Cubs, and God.  When we get a call that starts, “I got some tests done, and….” we put our faith in doctors, technology….and God.  I understand the bargaining; we all do it.  “If you make this come out ok, I’ll (fill in the blank).  But here’s the thing:  you don’t bargain with something that’s not there.  You have to believe there’s another partner in the negotiation. That’s why I don’t think that Jacob is belittling God’s promise.  You only bargain with someone or something that has meaning for you, something you don’t want to lose.  You fight for that marriage, that journey, that test-result.  (Ok, the keeping faith in the Cubs is the exception…you just do it.)

Maybe it’s not the faith that’s conditional.  Maybe it’s the ongoing negotiation, conversation,and relationship to the Other Partner that make up the changing conditions which continues to engage the Constant, which is…..faith.

This entry was posted in Shabbat musings and tagged Bereshit, Commentary, Jacob's ladder, Parasha of the week, Shabbat, Torah, Vayetzei. Bookmark the permalink.